The Mead of Poetry:

At the conclusion of the Aesir-Vanir War, the Aesir and Vanir gods and goddesses sealed their truce by spitting into a great vat. From their spittle they formed a being whom they named Kvasir (“Fermented Berry Juice”). Kvasir was the wisest human that had ever lived; none were able to present him with a question for which he didn’t have a satisfying answer. He became famous and traveled throughout the world giving counsel.

Kvasir was invited to the home of two dwarves, Fjalar (“Deceiver”) and Galar (“Screamer”). Upon his arrival, the dwarves slew Kvasir and brewed mead with his blood. This mead contained Kvasir’s ability to dispense wisdom, and was appropriately named Óðrœrir (“Stirrer of Inspiration”). Any who drank of it would become a poet or a scholar.

When the gods questioned them about Kvasir’s disappearance, Fjalar and Galar told them that Kvasir had choked on his wisdom.

The two dwarves apparently delighted in murder. Soon after this incident, they took the giant Gilling out to sea and drowned him for sport. The sounds of Gilling’s weeping wife irritated them, so they killed her as well, this time by dropping a millstone on her head as she passed under the doorway of their house.

But this last mischief got the dwarves into trouble. When Gilling’s son, Suttung (“Heavy with Drink”), learned of his father’s murder, he seized the dwarves and, at low tide, carried them out to a reef that would soon be covered by the waves. The dwarves pleaded for their lives, and Suttung granted their request only when they agreed to give him the mead they had brewed with Kvasir’s blood. Suttung hid the vats of mead in a chamber beneath the mountain Hnitbjorg (“Pulsing Rock”), where he appointed his daughter Gunnlod (“Invitation to Battle”) to watch over them.

Now Odin, the chief of the gods, who is restless and unstoppable in his pursuit of wisdom, was displeased with the precious mead’s being hoarded away beneath a mountain. He bent his will toward acquiring it for himself and those he deemed worthy of its powers.

Disguised as a wandering farmhand, Odin went to the farm of Suttung’s brother, Baugi. There he found nine servants mowing hay. He approached them, took out a whetstone from under his cloak, and offered to sharpen their scythes. They eagerly agreed, and afterwards marveled at how well their scythes cut the hay. They all declared this to be the finest whetstone they had ever seen, and each asked to purchase it. Odin consented to sell it, “but,” he warned them, “you must pay a high price.” He then threw the stone into the air, and, in their scramble to catch it, the nine killed each other with their scythes.

Odin then went to Baugi’s door and introducted himself as “Bölverkr” (“Worker of Misfortune”). He offered to do the work of the nine servants who had, as he told it, so basely killed each other in a dispute in the field earlier that day. As his reward, he demanded a sip of Suttung’s mead.

Baugi responded that he had no control of the mead and that Suttung guarded it jealously, but that if Bölverkr could truly perform the work of nine men, he would help the apparent farmhand to obtain his desire.

At the end of the growing season, Odin had fulfilled his promise to the giant, who agreed to accompany him to Suttung to inquire about the mead. Suttung, however, angrily refused. The disguised god, reminding Baugi of their bargain, convinced the giant to aid him in gaining access to Gunnlod’s dwelling. The two went to a part of the mountain that Baugi knew to be nearest to the underground chamber. Odin took an auger out from his cloak and handed it to Baugi for hill to drill through the rock. The giant did so, and after much work announced that the hole was finished. Odin blew into the hole to verify Baugi’s claim, and when the rock-dust blew back into his face, he knew that his companion had lied to him. The suspicious god then bade the giant to finish what he had started. When Baugi proclaimed the hole to be complete for a second time, Odin once again blew into the hole. This time the debris were blown through the hole.

Odin thanked Baugi for his help, shifted his shape into that of a snake, and crawled into the hole. Baugi stabbed after him with the auger, but Odin made it through just in time.

Once inside, he assumed the form of a charming young man and made his way to where Gunnlod guarded the mead. He won her favor and secured a promise from her that, if he would sleep with her for three nights, she would grant him three sips of the mead. After the third night, Odin went to the mead, which was in three vats, and consumed the contents of each vat in a single draught.

Odin then changed his shape yet again, this time into that of an eagle, and flew off toward Asgard, the gods’ celestial stronghold, with his prize in his throat. Suttung soon discovered this trickery, took on the form of another eagle, and flew off in pursuit of Odin.

When the gods spied their leader approaching with Suttung close behind him, they set out several vessels at the rim of their fortress. Odin reached the abode of his fellow gods before Suttung could catch him, and the giant retreated in anguish. As Odin came to the containers, he regurgitated the mead into them. As he did so, however, a few drops fell from his beak to Midgard, the world of humankind, below. These drops are the source of the abilities of all bad and mediocre poets and scholars. But the true poets and scholars are those to whom Odin dispenses his mead personally and with care. 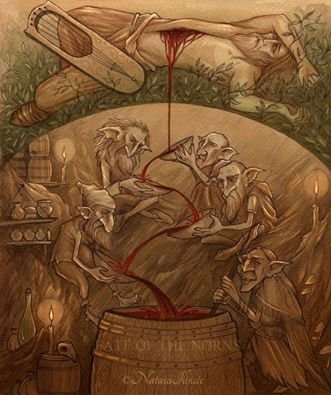 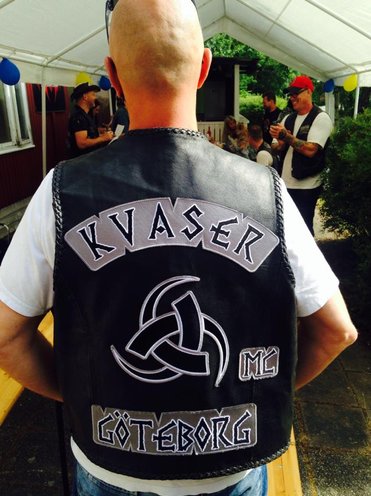 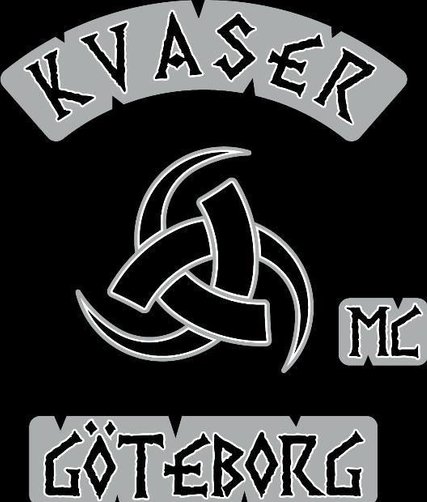